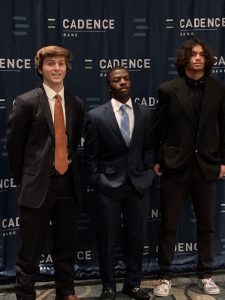 Jackson Billings was honored on Wednesday as one of the 3 finalists for Class 3A Football Back of the Year at the Alabama Sports Writers Association Player of the Year Banquet. Billings joined Jack Hayes from Piedmont and Daquan Johnson from Flomaton as finalists at the banquet as Johnson was presented with the Class 3A Back of the Year Award.

Billings helped lead the Wildcats to an 8-3 finish and a berth in the second round of the Class 3A playoffs. The Wildcats also repeated as Class 3A Region 8 Champions. Billings ran for more than 1,000 yards and passed for another 1,198 yards and accounted for 39 touchdowns this season. He has accepted an invitation as a preferred walk-on for Auburn football next season.

VS RANDOLPH
4:30 pm
View All Events