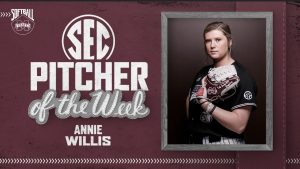 Former Westminster softball player, Annie Willis (2017), was named as the SEC Pitcher of the Week!

Willis was 4-0 last week in her four appearances. She allowed six hits during the week and one earned run while recording 19 strikeouts. On Sunday, she had a complete game where she had one unearned run and six strikeouts. During the week, she had a 9.5 strikeout to walk ratio and held opponents to a .122 batting average.

“Annie’s poise and confidence on the mound is fun to play behind, and she just continues to attack hitters.” Mississippi State Head Coach Samantha Ricketts said.