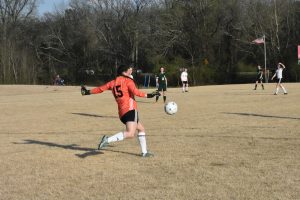 Ally Goode is the daughter of Ben and Michelle Goode. She has been a multi-sport athlete at WCA for her entire career, playing volleyball, basketball and joining the soccer team her senior year. Throughout all the sports she played, there is a recurring theme from her coaches (Coach Noller and Coach Richards) and that is Ally’s team spirit, work ethic and enthusiasm. Coach Noller says his favorite memory of Ally is this: “It was our last match, during the half I asked the players to get the ball back to Ally and then work the ball out of the back. Ally’s expression was something like “Say What?”, priceless. Ally, I believe, was just a bit concerned. However, when the ball was played back she received it without problem and handled it just like she’d been in that situation before, to me she made it look like it was just a walk in the park.” Similarly for her senior year of volleyball Coach Richards adds, “Ally stepped up and played a new position that the team needed filled. She put in the time with extra reps and an eagerness to learn which ultimately led to her being the perfect fit for that position. Ally is a terrific teammate and was always willing to do what was best for the team.” Her favorite soccer memory is “one of my favorite memories is when Coach decided to put me in for some of the last part of the game. We were winning 8-0, and he wanted me to get some experience on the field. When he told me to get my jersey on the rest of the team around me went crazy, they were screaming and cheering when I went on the field. It was the first soccer game I ever played in and the team was extremely supportive, I wish I had decided to play sooner than senior year.”

Ally’s advice to underclassmen is “Don’t let fear stop you from stepping out of your comfort zone, whether that is playing a new sport, taking an interesting class, or reaching out and making a new friend.” Her favorite Bible verse is Galatians 2:20. Ally will be attending University of North Alabama in the fall, studying Psychology. Wishing Ally the best in all of her future endeavors!