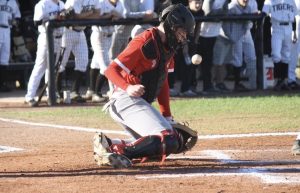 Bailey Harrison is the son of Mark and Michelle Harrison. He has played baseball since he was 3 years old. Bailey additionally played football for 2 seasons. Coach Anderson has the following to say, “Bailey showed up each day with the same winning mindset. His leadership and dugout presence was a constant. He also had an obsession with super mega baseball that was discussed quite often. He led by example and was fully committed to his team, his teammates, and the program.” One of Bailey’s favorite memories is “My Freshman year on the beach trip when I was catching Caden Best’s bullpen and the ball kept slipping out of his hand resulting in him throwing the ball out of the pen during the game at least five times. After one or two we couldn’t stop laughing at each other which caused the other few to sail out of the pen.” Advice from Bailey to underclassmen is this: Don’t ever doubt how good this program could be because with the hard work and dedication that we put in the last few years the foundation has been set and it is all up from here. Believe in each other and work hard every time you hit the field because you never know when the end will come and you will have to hang up the jersey for the last time. Romans 8:38-39 is his favorite Bible verse. Bailey will be attending Mississippi State University in the fall while studying Kinesiology with a focus in Neuromechanics for a Pre-Physical Therapy schooling route. Best wishes for all that you do, Bailey!!

VS RANDOLPH
4:30 pm
View All Events